Soundbars – Sound bar all the Speakers

Soundbars – Sound bar all the Speakers

There is no doubt that as TV Installers, we are primarily employed by customers to make their TV viewing area look sleek and modern. Wall mounting a TV has been extremely common for years now, and manufacturers such as Samsung and LG have poured a great deal of research and development into creating slim-line, minimalistic TV designs.

With such a huge portion of our clientele living in smaller yet very modern apartments – that slim minimalist design is eagerly sought after when it comes to TV and Sound. As TV’s became thinner – the speakers inside the TV became smaller and the sound quality has suffered immensely.

A home theatre system is an obvious add-on choice, and even though this is still the best choice for producing that true cinema experience – many of the modern dwellings do not suit well with having big black speakers strewn around the room.

Soundbars are a long, thin single speaker places in front or below the TV, with a wireless sub woofer, and work by replicating surround sound by having a number of small speakers inside the single bar.

Essentially, soundbars consist of several speakers in one, and each of those speakers inside the ‘bar’ is positioned in such a way as to “mimic” surround sound. What is referred to as a “psycho-acoustic” effect means sound literally bounces off the walls. 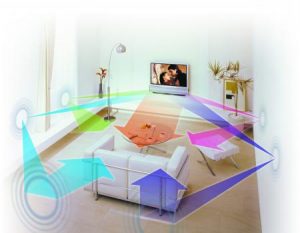 If you have ever owned a conventional 5.1 Home-Theatre system, you would have noticed that most of the sound comes from the front three speakers. If a car is moving from left to right on the screen, then the left speaker starts, the sound passes through the centre and then to the right.

This effect is reproduced effectively and easily through a soundbar – with the left speakers inside the bar working to match the image on the left of the TV, and switching through the centre to the right as the image on the screen moves accordingly.

Where the technology mostly suffers compared to having a full compliment of speakers around you is the rear sound. Basically soundbars produce different ‘waves’ of sound, so there’s a unique wave for each channel. There are obviously no speakers behind you, so they need to replicate this sound in another way, So they are designed to bounce sound off the wall beside and behind you, to give you a simulated surround sound effect.

For the purist, the Soundbar will never satisfactorily replace the quality and immersion of sound provided from a 5.1, 6.1 or 7.1 Channel Home Theatre System setup. The true production of Cinema surround sound in one’s living room is still a very sought after result from a lot of customers.

But there is no doubt that a soundbar provides an improvement on the poor tinny sound quality produced by today’s slim line TVs. Coupled with the soundbar’s slick one speaker design, this is enough to sway most people away from having five to seven tower speakers arranged around their cabinets and couches, even if the surround effect isn’t as pronounced.

For the ever-increasing number of people embracing the small, city living lifestyle – the soundbar provides the perfect compromise between sound quality and design.